Microsoft Teams Gets a Huge Update 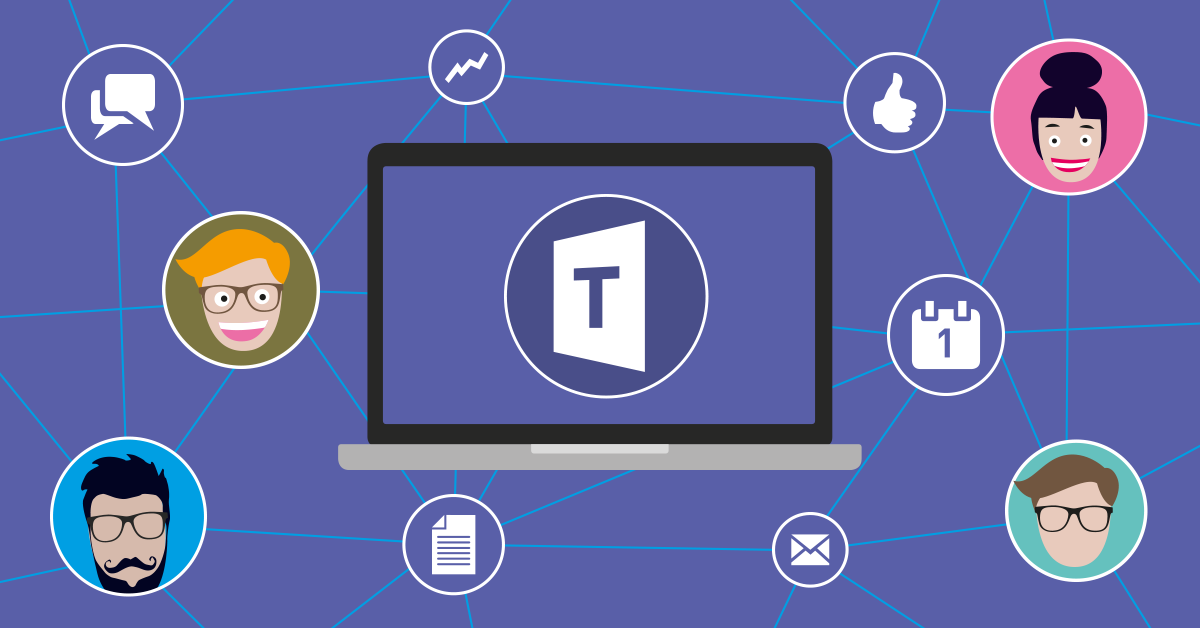 In January of 2018, Microsoft Teams got a bit of a face lift that has brought some new and interesting UI changes. These changes, in addition to Microsoft allowing customers the ability to move from Skype for Business Online to Teams for IM and Voice/Conferencing capabilities, is slowly moving Teams to become a legitimate competitor to solutions like Slack, Cisco Spark, Workzone, and many others.

In this post, we’ll go over some of the most notable changes and how you can start taking advantage of them today.

The Teams Store now offers a variety of ways for appdevs to integrate and bring information in to Microsoft Teams. Things like connectors, bots, etc allow for bringing in pertinent information into one place, allowing for better collaboration with your corporate team and organization in general.

If you feel that you are not comfortable with organizational users using external apps with Teams, there’s no need to fret. You can used the Teams Settings in the Office 365 Admin center to choose which apps are allowed and which are not, or just disable external apps altogether. 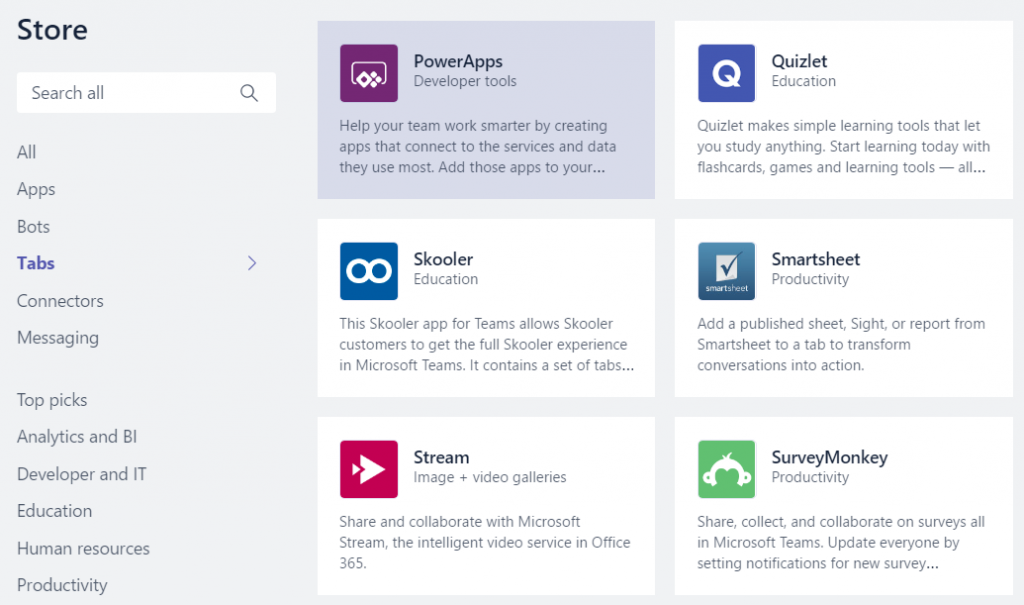 This is a new item that was added to navigation bar along with the App Store. The menu contains links to apps that are not linked to a specific team or channel. By default, the apps you will see in this menu are OneNote, Planner, Stream, and Who, but as more apps are installed for a user, they will get added into the menu.

In the image below, I’ve added the Flow app, which allows me to create different types for Automated Processes that can integrate with solutions from Office 365, Azure, On-premises, and third party sources. 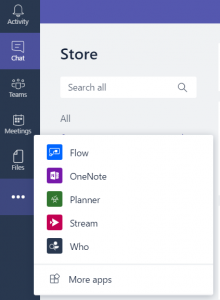 No this is not a reincarnation of the dreaded Clippy from Microsoft Office. The Who bot is more of a digital assistant that can gather information for you in a short amount of time.  Using the Chat section, you can ask the bot a question such as “Who is Mike” or “Who is a developer”. The bot will then use information that is stored in Azure Active Directory and then sends notice to the Microsoft Graph to generate answers.

Overtime, I foresee this feature to become a very critical part of teams. This feature will allow for new employees to the organization to navigate their way to finding out who the right person for information is without having to ask around. The only downside to this is that Azure AD must have accurate and updated information. If not, the poor sap might as well be roaming the halls asking every person if they know who they are searching for. 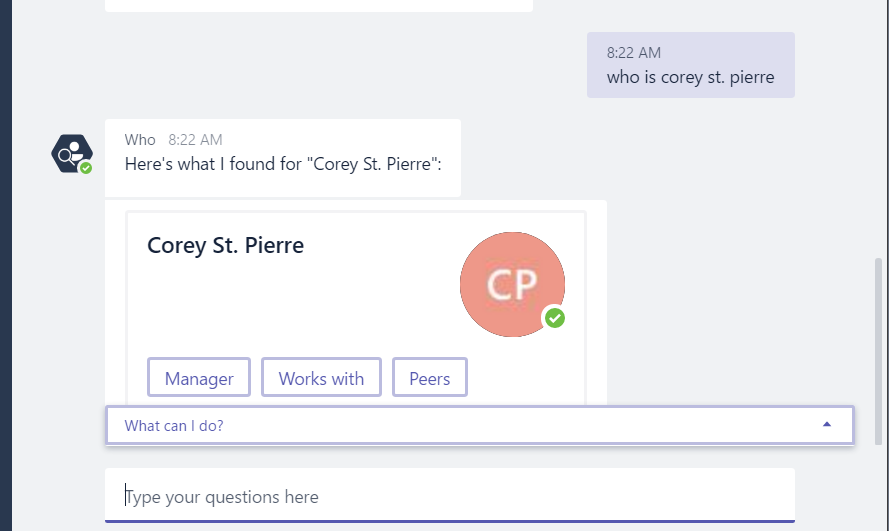 The search box has always been a staple of Microsoft Teams. It was decent, but was not very robust in the way you could search your various Teams and Channels. Now, that is about to change. (somewhat) Search is still the same, but you can now type commands (must be prefixed with a /) to perform various tasks within the Teams App/WebApp.

Just typing the / in the search bar will provide you with a list of commands that can be run. Most of the commands are basic, such as seeing recent files, setting your availability status, or jumping to as specific team or channel. However, some of these commands are pretty useful, such as bringing up a list of your recent files, asking the Who bot a question, or starting a new call with someone by typing all or part of their name.

Some are more of the click-and-go type, manually navigating to where they want to get to within an app. But I see this gaining more traction in the future as it could become a quicker way (at least in my opinion) to navigate Teams. 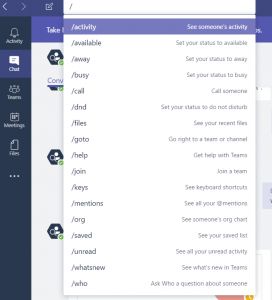 In addition to the command bar, you can acquire apps from the Teams Store that can be integrated with the command bar to fetch information requested. Out of the box, Microsoft has bundled apps like News, Images, and Weather within Teams.

In the example below, I added the Youtube app and typed @Youtube and then typed Microsoft Teams. This will perform a search on Youtube for what I requested. I can then click on one of the items and choose to copy the URL, or click on the result again to open a browser and be taken to the video’s URL directly.

This tool is very useful, and third party developers can integrate their apps with Teams in the same manner. 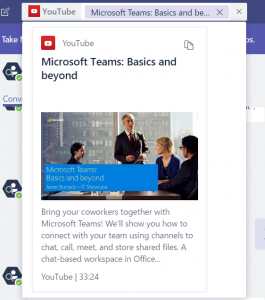 With all the changes that have been brought to Teams in January, it’s clear Microsoft is trying to accelerate the adoption pace of Teams. They are trying to position Teams as the one stop hub for teamwork, instead of working out of multiple solutions like SharePoint Online, Skype for Business, Office 365 Groups, and One Drive for Business.

I’ve enjoyed Teams since it was first released by Microsoft, and I’m hoping that 2018 will bring some awesome and exciting new changes to Teams and it’s functionality as well.